No sooner had we taken the last “ good bye” picture, that Nyima’s wife called us back into the house, to

“PLEASE buy something, to help”

They now have lost their only bread winner and although all women of the family are making/ stringing the widely available “Tibetan jewellery” items, since they have to stay home for the mourning period and take care of the lighting of the butter lamps, they are all but out of money and dependent on the good will and help of their neighbours.

Hastily mother and daughter spread a tangled jumble of necklaces of all varieties onto the table, then left to get a few of Nyima’s personal things, that they were prepared to sell.

There was a small “movable Altar” – 625 silver with a picture of Padmasambhava in the centre. It was a well used and not to clean, tarnished and still held a few yellow flower pedals.

I was shocked! Did they RELAY want to sell that to us? Should that not stay with the precious Melongs and his headdress????

BUT then, when I touched it – – something did not feel right….. there was no Power!?

Someone else quickly claimed it.

More things were taken from a small bag and put onto the loaded table. There were a Dorje and a tangled mess of leather onto which 3 copper balls were attached. A red flash of lightning zzzaged right onto them and I reached for.

Not with heat from Fire, but with – what I again only can describe as Anaguilin = Spirit POWER.

They were about Walnut size, each on a tangled leather string, symmetrical “4 directions design” soldered in brass onto 1 side, and respectively each adorned with a Turquoise and a Red Coral stone in its middle. The reverse side also showed a kanji and a design, that immediately reminded me of our Siberian Ülziy eternal knot design, that also is very prevalent here in Nepal.

They are known as Ghau

Also immediately I KNEW, that 2 of these were “for me” and one was “for my friend M.

OK, no problem. I held on to them.

All the other items were also taken and now the ladies were looking through the jewellery.

I felt overwhelmed and slightly befuddled by the Energy emanating from the ritual objects in my hands, handed over the asked for financial contribution and left the small house to the shoppers. Outside the rain had finally stopped.

A while later we made our way back through the village and then up to the monastery. In front of its gates were a row of covered stalls of Tibetan vendors.

They all beckoned us, but Bhola urged us, not to linger but rather hasten to the monastery.

But I was in no mood to be rushed and took a closer look at the wares offered in the stalls.

Beautiful pieces of handiwork most quite similar to what we had seen in Hanuman Dorka Square in Kathmandu and then also similar beaded necklaces like the ones for sale in Nyima’s home.

I also noticed several more of the small silver altars, identical to the one seen at the house, less “worn and used” but with the same pictures and flowers… All were offered as “authentic” and “old”

Nowhere however I saw any of the copper prayer/ amulet ghaus again and so was glad, to have “adopted” them, when I did….

-Neither here or anywhere else in Nepal.

I was much intrigued by a single cymbal or tingsha (NO idea, how this word is written.. 😦 )

It is rung with the tip of a Yak horn. It had a beautiful prolonged ring and a prayer mantra was engraved into the cast.

The Elder, that sold it was obviously poor, wearing ripped trousers and a shirt that was more a rag than a garment. He was somewhat shy and – with the weather being what it was, when I looked at him I was not surprised to “see” red and inflamed joints namely right shoulder and both knees.

I asked him – more in sign language than anything else, if he had often carried heavy loads. Yes, yes, wood and rocks for building 45 years… “and pain?”

“Yes, yes, here” = shoulder and Aou ou ou, here,” pointing to his knees and the moist fog outside……

I bargained hard with him for that tingsha – from 450 rupees down to 150, but then gave him the full amount he had initially asked for, also pulling out my bottle of ibuprofen gave some some instructions as to when to take 1 and specifying, that the rest of the money I had given him was for another bottle of anti inflammatories at the drug store in town. 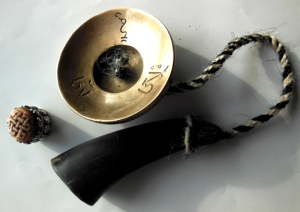 Tears welled up in his eyes as he hugged me good bye…..

But then I HAD to go.

I caught up with the rest of the group at the entrance of the monastery temple. 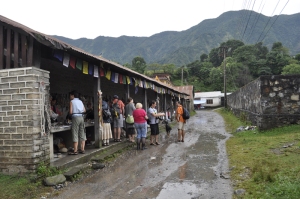